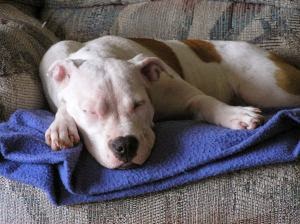 Loudoun County supervisors this week approved a big change for the animal shelter, reversing a long-standing and controversial policy not to allow pit bulls or pit bull mixes to be adopted. The new policy is effective immediately.

The proposal came as a recommendation from the Animal Advisory Committee, with support from the Department of Animal Services, and supervisors said they were happy to see the change.

“We should not have breed discrimination,” Vice Chairman Shawn Williams (R-Broad Run) said, adding that he was “glad we are getting this squared away.”

This is not the first time the county has considered change the ban on pit bull adoption, which was enacted with animal adoption policies created in 1994. In 2007, the Animal Advisory Committee recommended the change, but the previous Board of Supervisors declined, instead allowing the Department of Animal Services to transfer the dogs to other animal agencies and breed rescue organizations.

In 2009, the county’s prohibition policy was put on trial after a lawsuit filed by Animal Rescue of Tidewater. However, a Circuit Court judge ruled the county policy did not violate any laws.

Pit bulls and pit bull mixes remain a popular dog in Loudoun County. According to Department of Animal Services data there are currently 1,145 licensed in the county, making the pit bull the ninth most popular breed. However, department staff and animal control officers remain concerned that residents may be reluctant to license their animals and that some of the dogs “are entering into the County from unknown sources, where policies and procedures for adoption or sale may be below LCAS standards for ownership, health and behavior,” according to the department’s report.

About 100 pit bulls a year have been brought to the Loudoun County Animal Shelter from 2010 to 2013, with about 56 percent of those being euthanized. Thirty-three percent were returned to their owners and 11 percent were transferred to another agency or adoption organizations.

Amy Martin, the animal shelter administrator, said that some of the dogs that were put down were sick or injured to a point where “it was kinder to euthanize.” There also were some that had significant enough behavior problems that they could not be transferred.

“And we have had situations where the transfer partners just weren’t available,” Martin said. “When we’re busy, they’re busy…but without the transfer avenue we didn’t have any avenue.”

While the shelter will still utilize the transfer option, it will now have the ability to put the dog out on the floor for adoption when there is nowhere for it to be transferred.

“Now will be able to adopt them–get them ready and get them on the adoption floor,” Martin said.

Throughout the debate over pit bull adoption, the Loudoun County Animal Shelter has used a behavioral assessment tool to evaluate every animal, including pit bulls. Recently, the program that had been in place to assess all animals has been revamped.

The new protocol, Companion Animal Readiness Program, or CARP, has been in place since September 2013. It is based on the American Society for the Prevention of Cruelty to Animals’ anti-cruelty behavior assessment program. The program, which has a goal to facilitate successful, long-term matches between all animals and adoptive owners, looks at several aspects of the dog and its behavior, including General Handling/Kennel Behavior, Sociability and Reaction to New Environment, Physical Control and Restraint, Play/Prey Response and Mental Sensitivity, among others.

“We do daily observations,” Martin said Thursday. “We focus heavily on enrichment and socialization so we get a full picture of the pet. We do the assessment through the entire time the animal is here. So it is not just a snapshot in time.”

Martin said the animal shelter staff has seen success with the assessment program because pit bulls have been successfully transferred to other agencies and adopted there.

“We know we can safely determine if the animal is medically compromised or emotionally compromised, Martin said. “It proved our point that we knew, that pit bulls are not different.”

That also was the sentiment expressed by the Board of Supervisors Wednesday night.

“If the owners are good, the pit bulls are good,” Supervisor Ralph Buona (R-Ashburn) said. “There is an old saying: you don’t train a dog, you train a human.”

County Chairman Scott K. York (R-At Large) said he was supportive of the change, but noted the previous policy was not simply to discriminate against pit bulls. “It was an issue we had with liability and protection to ensure that the animal we were adopting out to a family was a safe animal and now we have that assurance,” he said, of the new assessment protocol.

Supervisors also said they were confident in the ability of the animal shelter staff to assess an animal and help become adoptable even after trauma.

“You can deal with a dog that has been beaten, shot, and you can bring that dog back where it is a loving member of a family,” Supervisor Suzanne Volpe (R-Algonkian) said.

Martin said the animal shelter staff members were thrilled when they learned about the board’s decision to allow pit bull adoption, some of them to the point of tears.

“All of our staff is excited to be able to do this, well and right,” she said. “When board was so confident in our ability to do it, we’ve always known we could, but to have that confirmed last night was really heartwarming to hear. This has been so long in the making.”

Lottie came from a rough past and can require a slow warm up with new people. She has displayed a comfortable energy level in the... more